Arab castles and citadels not to be missed in Spain

They are imposing, durable, steeped in history. They are one of the best examples of the  breathtaking legacy of Al Andalus and the Arab presence in Spain.  There are numerous fortified buildings  you can still find standing in Spanish cities and towns, many of them in Andalusia. They are counted by dozens, and some of the most famous are in some of the cities that, in all probability, you want to visit in Spain.

These fortresses are of two types, alcazabas and alcázares, which are also words of Arabic origin. Alcazaba comes from the word al-qasbah and refers to an urban walled enclosure whose function was to defend a specific place and its contours. The alcazabas housed a military garrison and used to have houses, warehouses for grain and other food, a mosque... All of this constituted a citadel. At one of its ends could also be, or not, an alcázar, that is, a fortified castle or palace that served as a residence for a Muslim ruler. The Spanish word alcázar comes from the Arabic al-qasar. As the Muslim territories of Al Andalus passed into Christian hands, the new Christian kings and rulers were taking these fortresses and making them their residences and transforming and modernizing them over time.

Could you have imagined that the main palace of Spain, the Royal Palace of Madrid, a symbol of power and the place where the throne and the crowns of the Spanish monarchs are found, has its roots in an alcázar built in Al Andalus times and destroyed by a fire in 1734?

Those that follow are the most important alcazabas and alcázares of Arab and Muslim origin that you can visit during your trip to Spain. Many of them are in Andalusia, but you can also find them in other Spanish regions such as Aragon, Castilla La Mancha, Castilla León or Extremadura, among others. 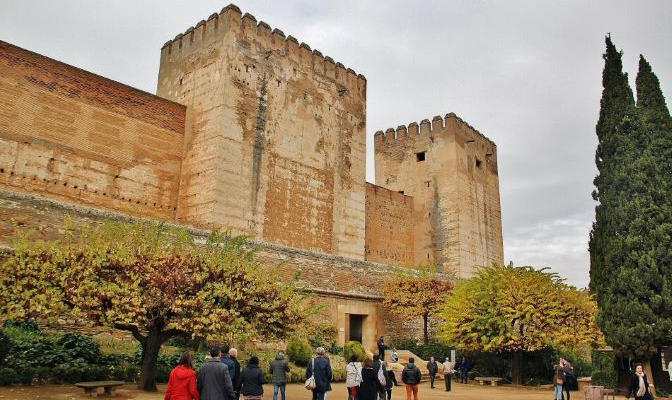 The Alcazaba of La Alhambra is, together with the towers called Torres Bermejas, the oldest part of this breathtaking  monumental complex in Granada.   It was built by Mohammed I, the first Nasrid king (s. XIII). When the new royal palaces were finished and the king and his family moved there, the Alcazaba was turned into a fortress with military functions and the habitual residence of the elite army.  In the Alcazaba's enclosure you can visit three famouse towers called Quebrada, del  Homenaje and de la Vela. 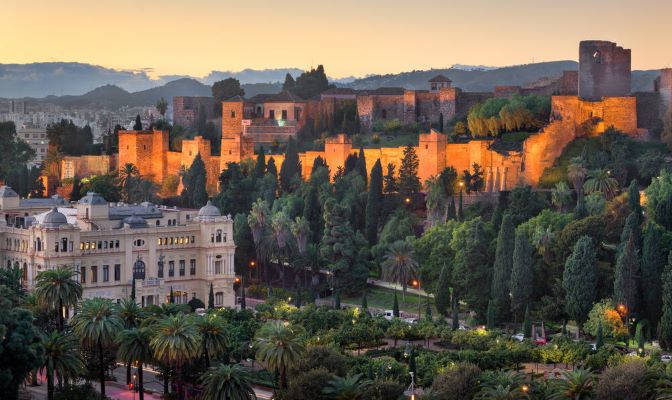 Built in 1040 on a hill dominating the town, this fortress-palace is one of the largest Muslim military buildings preserved in Spain and the most popular monument in Malaga, Andalusia. It combines the defensive purpose (it had three walls but only two remain), with the beauty of an Arab palace -in fact, three palaces- that recalls that of the Alhambra in Granda. Do not miss the gardens and the superb view over the city and the marina.  Its location is equally unique: next to the remains of a Roman theater. 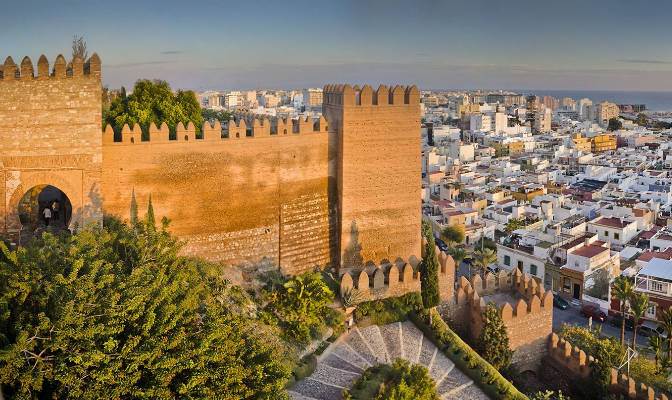 Almería is the easternmost of the eight provinces of Andalusia. With 43,500 m2, 1,430 meters of outer perimeter and a triple walled enclosure, this citadel is one of the largest that the Muslims built in Spain. Ordered by Abderramán III, enlarged by Al Mansur and concluded by Hayran, an earthquake seriously affected its structure in 1522. Next to this alcazaba you will find a group of troglodyte dwellings carved out of the stone. 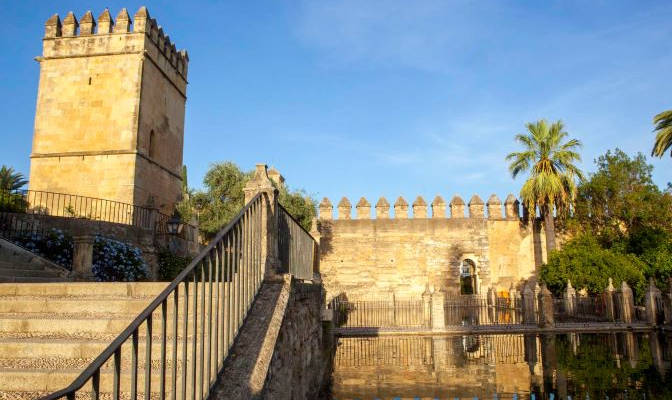 Next to the impressive Great Mosque of Cordoba you will find this Christian alcazar that stands in the same place where the Umayyad emirs and caliphs resided from 756 to 1236. The Islamic palace, which was linked to the mosque by a passageway, occupied an area much larger than the Christian Alcazar. The baths -the so-called  Baños califales, caliphal baths-, which can be visited, are preserved from that Andalusí building. The gardens of the current alcázar also preserve the essence of Al Andalus, the plants brought from the East: lemon trees, orange trees, myrtles, jasmine, alelis ... 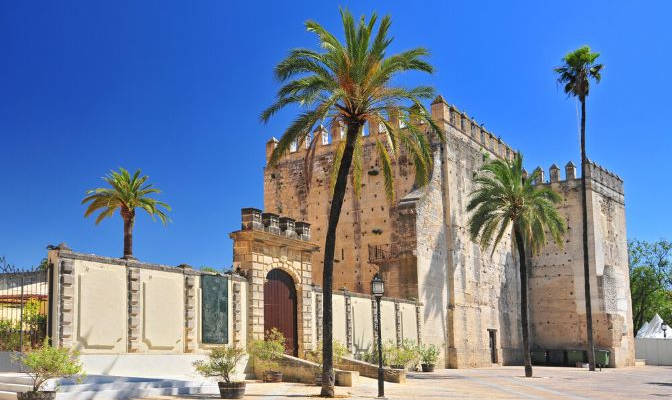 Jerez de la Frontera, which belongs to the province of Cadiz, is one of the largest towns in Andalusia. It is located inland, about 85 kilometers from the Strait of Gibraltar. Between 711 and 1264 it was the Muslim Sherish, one of the prosperous territories of Al Andalus. The Islamic  alcázar, built in the 11th century  in Almohad style, preserves seven towers (of the twelve it originally had) as well as two gates, the baths and the mosque turned into a church. 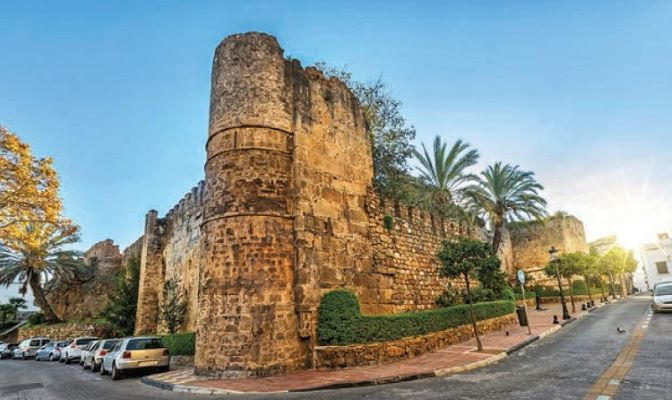 Marbella is one of the most famous holiday destinations on the Costa del Sol, Andalusia and Spain. There, as in so many other places in Andalusia, the heritage of Al Andalus is very present. Indeed, Marbella was the Islamic Marbiliya. In the old village you will find the remains of the Alcazaba and the ancient Arab walls. The construction of the caliphal castle was ordered by Abderrahman III (X century) as a strategic point to control the territory. The wall had over 10 defensive towers, and three gates. Only 2 towers remain. 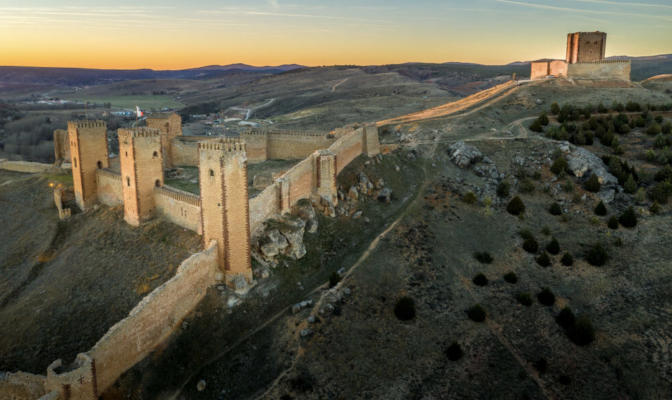 Al Andalus was divided into three large administrative areas, called Marcas: the Upper Marca (most of present-day Aragon, Navarra and part of Catalonia, with capital in Zaragoza); the Middle Marca, with its capital in Toledo (which included the areas that later corresponded to Castilla and southern Aragon) and the Lower Marca, with the entire southwest of the Iberian Peninsula. Each of the  Marcas was divided into districts which were called `Coras`. Molina de Aragón was the capital of one of the coras of the Middle Marca. An imposing  alcázar remains from this important past. A spacious and elegant complex  built in Al Andalus times on an old Celtiberian fort between the 10th and 11th centuries . 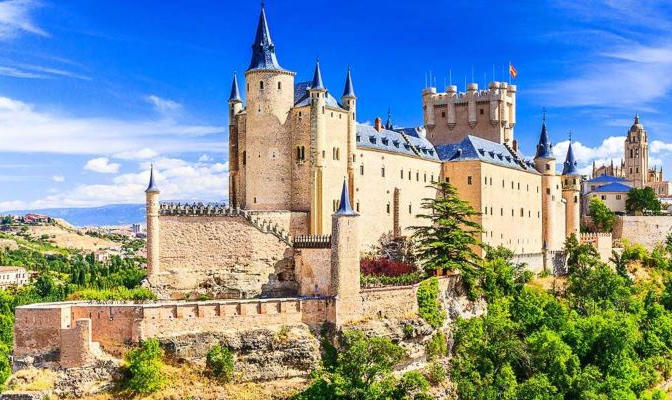 This imposing medieval alcázar has the typical image of castles in European tales, but it is of Muslim origin. In 1997, restoration works uncovered some Almohad windows in the main tower.  The black slate roofs and the pointed capitals were added in the XVI century. Today this alcazar is the symbol of the old city of Segovia, declared a World Heritage Site by UNESCO. It is only 73 kilometers from Madrid. 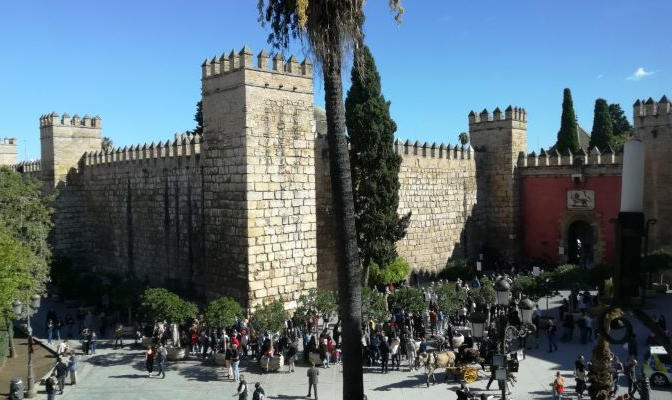 This fortified palace, World Heritage by UNESCO, is the oldest palace still in use in Europe. The Umayyad governors of Seville began to build it (X cenury). Then the Abbadies and later the Almohades. Of those Islamic palaces there is little left except the wall and the garrison yard of the original Al-Mubarak palace, built by Al Mutamid, the poet king.  However the most famous part of this amazing Royal Alcazar, ordered by the Christian King Don Pedro, was built by the hands of the best Muslim 'builders' following the inspiration of the Alhambra. It is one of the most beautiful examples of Mudejar art. 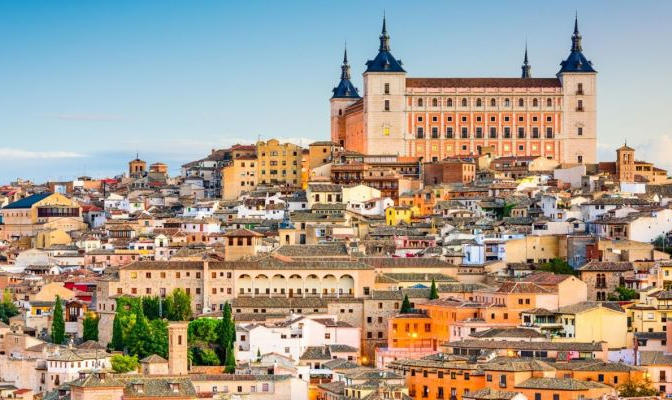 If you visit Toledo (only 75 kms from Madrid), It's impossible not to see it. It is  located on the highest hill of this city, a lonely rectangular mass dominating the horizon. Abderrahmán III built a fortress here, the old al-qasar. This strategic place had already been used before by Romans and since then it had always been linked to power. The current building was ordered to be built by Emperor Carlos V. It suffered several wars, fires, bombings... It currently houses the Army Museum. 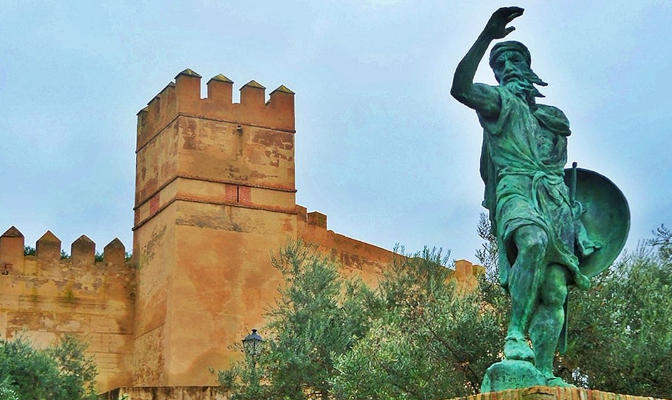 The city of Badajoz, in western Spain, on the borther with Portugal, was founded in 875 by Ibn Marwan al-Chilliqui. It is then that the Arab Alcazaba began to be built, on the highest area of the city, near the Guadiana River. The fortress controlled the natural passage from Castile to the territories of Andalusia and Portugal. The Alcazaba has a walled enclosure that comes mostly from the Almohad period (12th-13th century). From this wall you can see Portuguese lands and wonderful sunsets. The Alcazaba of Badajoz is the largest in Europe. 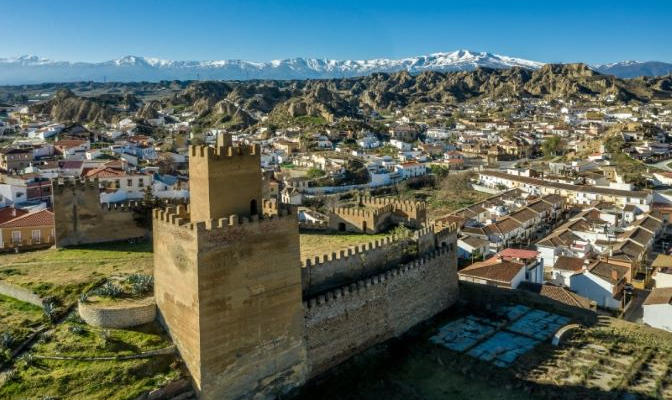 Guadix is a town in the province of Granada famous for its ancient cave-houses and for the peculiar landscape that surrounds it.  Of course, one of the most famous monuments in Guadix is its Muslim alcazaba, from the 11th century.

These are the 12 most interesting alcazares and alcazabas in Spain. But not the only ones!

Tagged in
Visits
Let's Go Blog
12 impressive alcázares & alcazabas
Mar 19, 2021
Arab castles and citadels not to be missed in Spain
Read more
7 Spanish dishes you must try
Jan 10, 2021
They are the most famous in Spain and are made with halal ingredients
Read more
'Is this halal?'
Nov 7, 2020
If you wonder how to find halal restaurants, follow these tips!
Read more
View more posts
We use cookies and other technologies
We process personal browsing data, such as IP addresses or online identifiers, and use our own and third-party cookies to analyse the use of the website and personalise our content and advertising based on the analysis of your browsing habits. Access to this website may involve the transmission of such data to social networks or other third parties whose buttons or modules are available on the website, for marketing purposes and others of their own responsibility. You have the right to request access to your data for rectification, deletion or portability, the limitation of its processing or to oppose it, as well as to make a claim to a control authority. For more information about the use of cookies and your rights, access our Cookies