7 Spanish dishes you must try

Enjoying the local gastronomy is one of the best facets of any trip. We propose here 7 typical dishes of Spanish cuisine that you cannot miss on your visit to Spain. Some are so easy to prepare -although no less delicious- that you can even make them yourself back home! Of course all are made with Halal ingredients. Although some of them, like the famous paella, also have numerous versions that are not Halal. Here we tell you how to enjoy everyone with peace of mind. 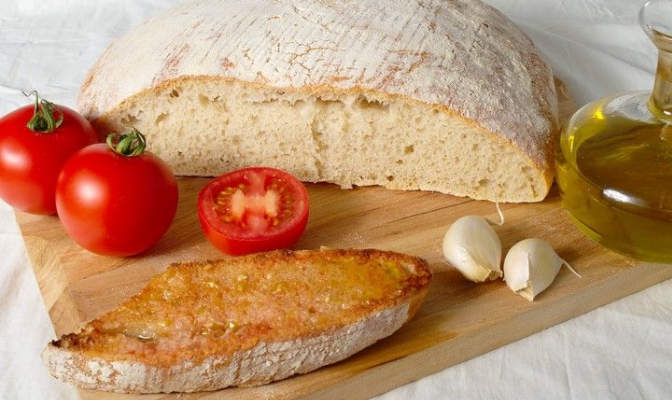 A slice of toasted bread with scrubbed tomato and olive oil. Garlic is optional.

That is, bread with tomato. As simple as this: cut a ripe tomato and rub it on one (or several) slices of toasted bread, so that the crumb is impregnated with its pulp. On top, a drizzle of extra virgin olive oil, a pinch of salt... and voila! It is perfect to accompany any lunch or dinner, or for breakfast. It's very typical in Barcelona, where it is called, in Catalan, ‘pa amb tomàquet’.

In Andalusia it is one of the most common breakfasts. Here the way to prepare it in bars, cafes and hotels is a little different. The usual thing is that they serve you, on the one hand, the toasted bread and, on the other, a portion of crushed tomato so that you can distribute it yourself on the bread, as if it were a jam. On your table you will also have a small bottle of extra virgin olive oil so that you can add it to your liking. 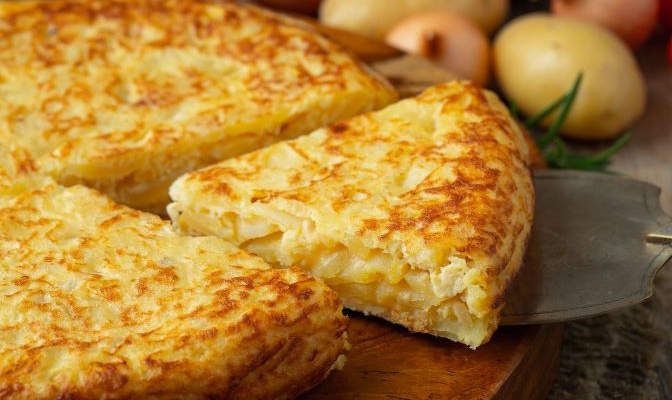 The Potato omelette is so popular in Spain, that it is also called ‘Spanish omelette’. Ingredients: potatoes, eggs and olive oil. Adding onion when you fry the potato is optional (in Spain there are two sides in this regard, those who do not conceive the omelette without onion and those who detest it). In another post we will explain the recipe in detail but, in summary, it is like this: the potatoes are cut into thick slices and fried in extra-virgin olive oil. Once the potatoes are softened and strained through a colander to extract the oil, they are mixed with beaten eggs and the whole is fried with a little oil in a pan to form a kind of pie about 3 or 4 centimeters thick. Yummy. In Spain there is hardly any bar or cafeteria that does not serve potato omelette, usually in individual servings. You will also find it ready in all supermarkets. It only takes a few minutes in the oven or microwave. 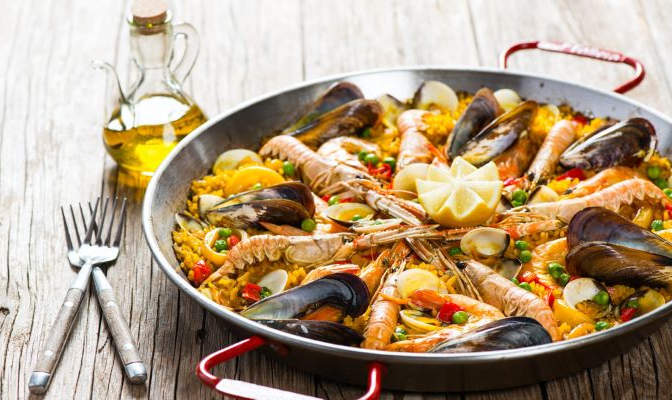 Seafood paella. Here with crayfish, mussels, squid... Rice is always the base ingredient.

Paella is the queen of Spanish cuisine, the most famous dish and also one of the most delicious. Valencia is the cradle of paella, but it is typical of the entire Mediterranean coast. You can enjoy it anywhere else in Spain, although it is not very common in the northern half of the country. The paella’s base ingredient is rice. In addition, a second main ingredient that can be either seafood or meat (chicken, rabbit…). And to complete the recipe, some vegetables. There are numerous versions. Some paellas mix seafood and meat. There are also vegetarian paellas. And others even add snails, or some kind of pork or derivatives. Consequently, it is important that you make sure of the ingredients and, unless you are in a restaurant with halal offer, choose only seafood or vegetarian paella.

Although simple in appearance, making a good paella requires experience and knowing a few secrets. For example: the type of rice chosen and the type of pan where it is cooked, which is special for making paellas, are important. By the way, it is believed that the name of paella comes from the Arabic word ‘baqiyah'. 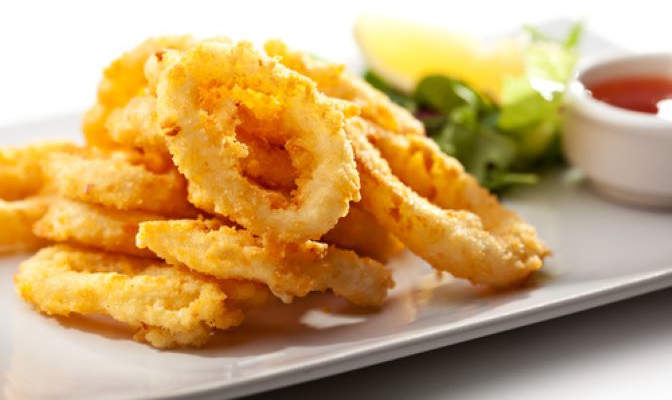 Squid coated with a thin layer of flour and fried in olive oil.

The fried calamari or fried squid is one of the most common 'tapas' dishes in Spain. They are also usually eaten as a main dish, or as part of fried fish and seafood mixed portion. The fresh and clean squid is cut into strips or rings that are coated with a thin layer of special flour for frying and dipped in hot olive oil to fry. Cooked in this way they are called 'calamares a la andaluza', which means Andalusian style. If the flour for coating is mixed with egg, then we have 'Squid a la romana' (that is, in the style of Rome, although paradoxically the dish has nothing to do with the capital of Italy). In Madrid, the fried calamari sandwich ('bocadillo de calamares') are an icon of the city. 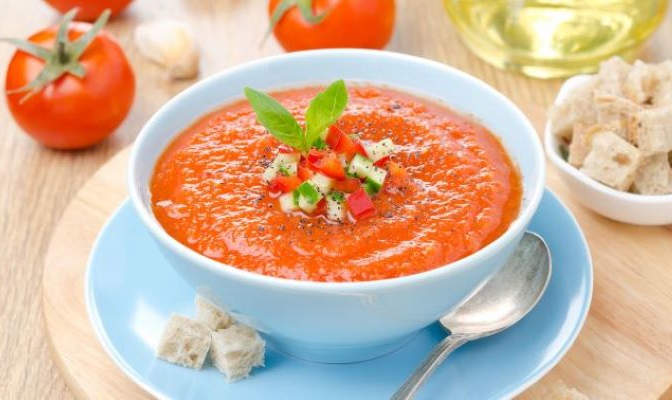 Gazpacho is refreshing and nutritious

Gazpacho is originally from Andalusia although it has also become popular throughout Spain. It is usually consumed in summer, because it is a kind of healthy, light and refreshing cold soup. The ingredients: ripe tomatoes, cucumber, bell pepper, bread, garlic, olive oil, vinegar, water and salt. All are crushed and mixed raw in a blender. It can be eaten with a spoon, or drunk. In summer, gazpacho is not lacking in restaurants throughout Spain. You can also find it in supermarkets, in liter bricks, or in small individual bottles. 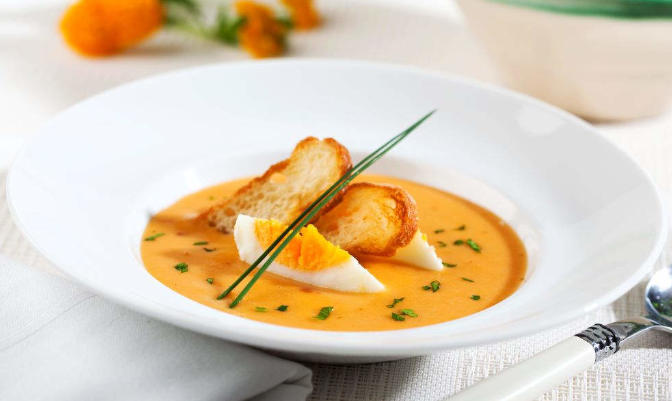 Salmorejo is made with tomato, bread, a little garlic and olive oil.

It is a famous dish from Córdoba that has also become popular throughout Spain. It is similar to gazpacho, but the ingredients and texture are different, thicker in the salmorejo. This cold Cordovan cream shares the tomato, the bread, the garlic and the olive oil with gazpacho, but does not contain cucumber, pepper, vinegar or water. You have to be attentive to the toppings that are usually added to the salmorejo, because they are usually slices of cured ham (pork). Just say you want it without ham. 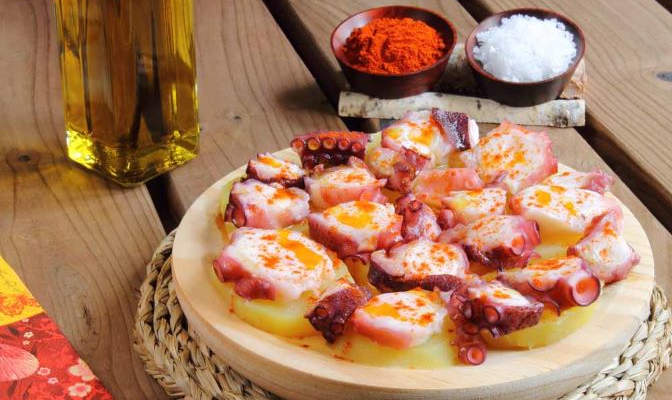 Galician octopus aka ‘octopus afeira’ in Galician language. You can translate it as octopus in the style of Galicia, which is a historic region in the northwest of Spain, bathed by waters of the Atlantic Ocean. All the ingredients of this tasty and nutritious dish are before your eyes: boiled octopus cut into thin slices, olive oil, salt and paprika (sweet or spicy). It is usually served with boiled potatoes.

You will find some of these typical Spanish dishes in some Halal restaurants, even if they are specialized in other types of gastronomy (Morocco, the Middle East ...). They usually have them for Muslim tourists visiting Spain.

Tagged in
Halal Meals
Let's Go Blog
12 impressive alcázares & alcazabas
Mar 19, 2021
Arab castles and citadels not to be missed in Spain
Read more
7 Spanish dishes you must try
Jan 10, 2021
They are the most famous in Spain and are made with halal ingredients
Read more
'Is this halal?'
Nov 7, 2020
If you wonder how to find halal restaurants, follow these tips!
Read more
View more posts
We use cookies and other technologies
We process personal browsing data, such as IP addresses or online identifiers, and use our own and third-party cookies to analyse the use of the website and personalise our content and advertising based on the analysis of your browsing habits. Access to this website may involve the transmission of such data to social networks or other third parties whose buttons or modules are available on the website, for marketing purposes and others of their own responsibility. You have the right to request access to your data for rectification, deletion or portability, the limitation of its processing or to oppose it, as well as to make a claim to a control authority. For more information about the use of cookies and your rights, access our Cookies