Costa del Sol is one of the most famous destinations in Andalusia and Spain. This region, located in the south of the Iberian Peninsula, in the province of Malaga, is not only a great place to enjoy a family vacation or a getaway by the Mediterranean Sea, but also a destination full of history, culture and Arab-Islamic heritage. Not in vain Malaqa, the Muslim Malaga, was the fourth intellectual power of Al Andalus after Cordoba, Granada and Seville.

Unlike other cities, Malaga had eight centuries of history as Al Andalus territory. From 713, when it was incorporated as territory of Umayyad Emirate and later Umayyad Caliphate, it was successively ruled by the Hammudí, Zirí, Almoravid, Almohad and Nasrid dynasties until 1487, when it passed into Christian hands. Therefore, Malaqa was Al Andalus for 774 years, which represents much more time than the 523 years of Cordoba (under Christian rule since 1236) or the 535 of Seville (which was the Islamic Ishbiliya until 1248).

You may be surprised to know that Malaqa was the first city in Al Andalus to have a madrasa and, as Islamic city, it shone as one of the main centers of knowledge in the entire Western Mediterranean: more than 250 wise men from all branches of knowledge lived there. In addition, Malaga/Malaqa was the main port of the Nasrid Kingdom of Granada since the second half of the 12th century. Thus, the Arab-Andalusian heritage, the traces of the Islamic past of Malaqa are rich and extensive and you will enjoy discovering them not only in the current Malaga city, but along the entire Costa del Sol.

Castles and ‘alcazabas’ (Arab fortress), old medinas with narrow white streets, watchtowers along the coast, centuries-old hammams, remains of ancient mosques, old Andalusian recipes and even the streets where some of the most mythical leaders of Al Andalus grew up ... You will find all of this and more on Costa del Sol. A region that also has numerous Halal restaurants and even dry hotels (the only two that exist for the moment in Spain and which are also Halal certified).

What follows is a summary of some of the essential landmarks of the Arab-Islamic and ‘Andalusí’ heritage in Costa del Sol. The legacy of eight centuries of history of Al Andalus in this amazing region of Andalusia.

The Alcazaba of Malaga 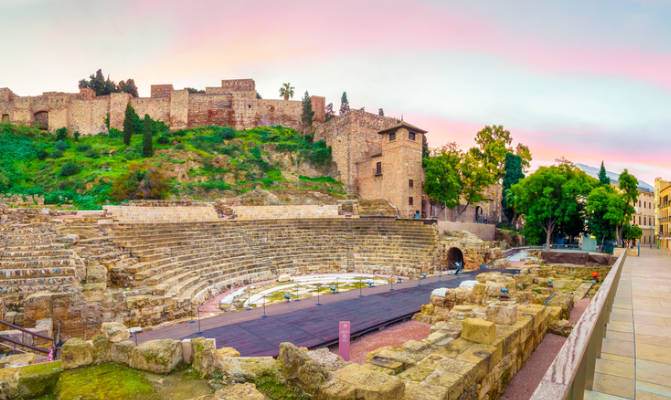 The Alcazaba of Malaga, next to the Roman Theater.

It is the most emblematic monument in Malaga. The picture of this fortress-palace located at the foot of Mount Gibralfaro and built between 1057-1063 (although there is mention about a defensive construction before, during the Umayyad emirate) is one of the best known images of the city and one of the most important Muslim buildings preserved in Spain. Its location is unique and unrepeatable: between an Arab defensive castle -the Gibralfaro Castle-, to which it is linked by a Muslim construction called Coracha, and a Roman Theater from which it is only separated by a few meters. Amazing!

The layout of the ‘Andalusi’ medinas 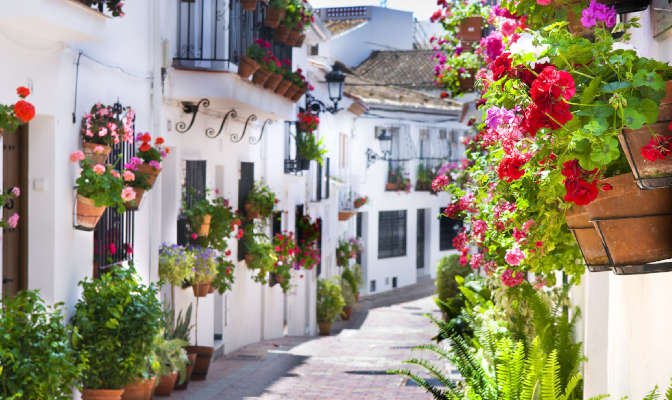 Street in the coastal town of Benalmadena, which name comes from 'Ibn al-Madin'.

Narrow and twisting streets with hanging flower pots, making up a maze of white houses, many of them with interior patios…. This is one of the most typical images in many towns and historic centers of Andalusia and, of course, it is also on Costa del Sol. This ancient layout is a living heritage of architecture and urban planning in Al Andalus. On Costa del Sol there are beautiful examples, such as the historic center of Marbella (Marbiliya), the town of Mijas (Mixa), Antequera (Antaquira) or Casares.  Also small white towns such as Ojén, Istán or Benahavis, full of charm, which once played a defensive role. 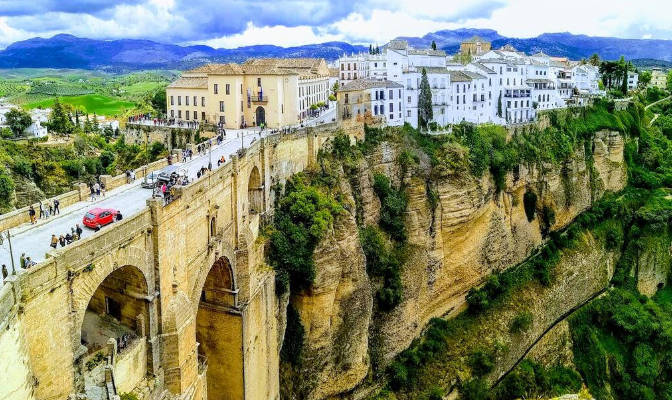 In the 8th century, Arabs called this beautiful city Izna-Rand Onda, and this is the origin of its current name. It was the capital of an Umayyad province and after that a taifa’s capital. Ronda reached its maximum splendor during the Islamic period. Among the remains of that time stand out a part of its walls and gates, remains of the ‘alcazaba’, some palaces and palatial houses, and Arab baths that are among the largest and best preserved in Spain. In addition, in the church of Santa María la Mayor, you will find some remains of the main mosque of those times: the structure of the old minaret turned into a bell tower and an arch that was part of the mihrab. 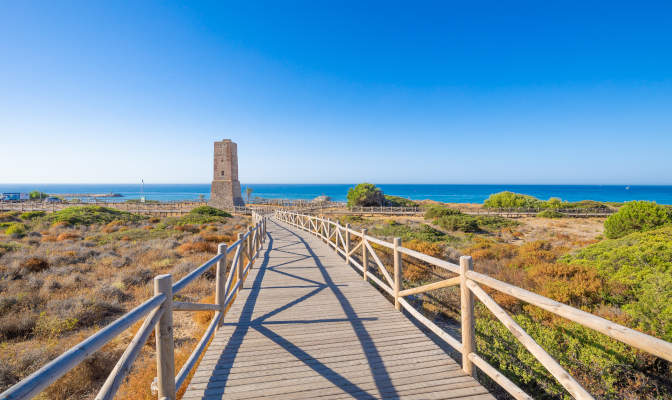 The entire coast of Malaga is dotted with these watchtowers that were an important element of the defensive system of Al Andalus to protect itself from the enemies that threatened and attacked the coasts from the sea. Later they were used by the Christians, who also built new ones. Proud and lonely, these watchtowers have stood the test of time and winds.There are more than 40 towers of this type along the Costa del Sol, most of them with Islamic origin. Even some famous towns of the region, like Torremolinos, were formed around one of them.

The 'Mudejar' and ‘Morisco’ footprint 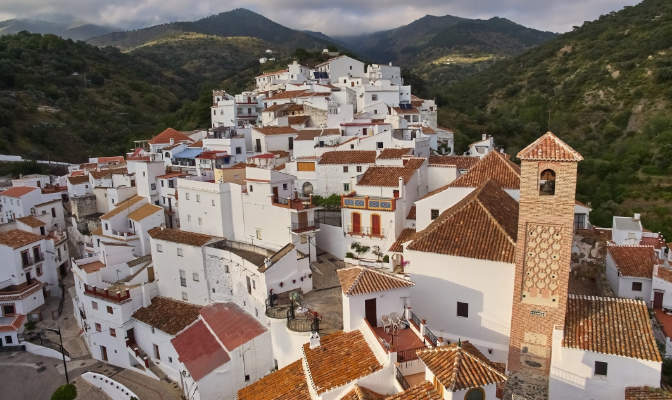 Salares, one of the villages on the Mudejar Route of the Axarquía, on the Eastern Costa del Sol.

The Mudejars were the Muslims who preserved the Islamic religion once the territories of Al Andalus were passing into Christian hands. Many of them were magnificent artisans and master builders, so they were hired by Christian nobles to build their houses, palaces and even churches... This is how these Muslims, the Mudejars, created a new artistic and architectural style, also called Mudejar, which mixes Islamic and Christian elements. This genuine style was declared World Heritage by Unesco in 1986. After the fall of the Nasrid Kingdom of Granada in 1492, the regulations became more restrictive for Muslims, who were losing rights, until they were forced to adopt the Christian religion and, finally, were expelled in 1603 (although many of them managed to return to what they considered their land and home, and lived in hiding for generations until their trail was completely lost). Those Muslims without the right to practice their faith were called Moriscos.

Mudejars and Moriscos were especially concentrated in the region of Axarquía or Eastern Costa del Sol (east of the city of Malaga). In Axarquía you will find some towns and villages in which the Mudejar and Morisco footprints have remained very clear to this day: Frigiliana, Arenas, Archez, Salares, Sedella, Canillas del Aceituno... They constitute the so-called Mudejar or Morisco Routes of the Axarquía. Beautiful and picturesque villages that ooze authenticity and flavor.

The homeland of Al Mansur 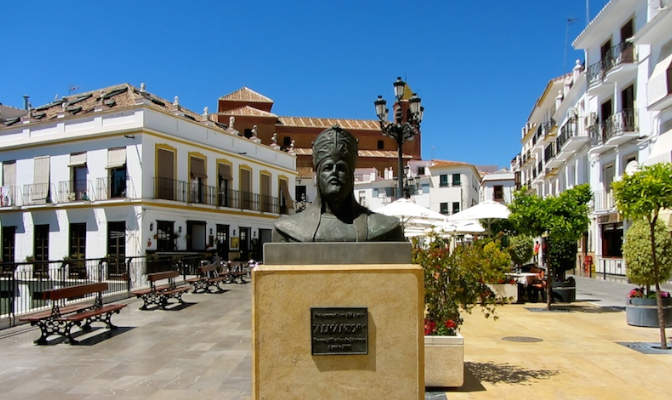 Bust of Al Mansur in the main square of Torrox, Costa del Sol.

Although there is some dispute in this regard, there is a certain consensus that Abo-Amir Muhammed Ben Abi Amer, better known as Al Mansur, was born in Torrox, one of the tourist towns on the Eastern Costa del Sol. Al Mansur ruled Al Andalus from 981 until his death in 1002: he became one of the most mythical leaders of Al Andalus. In the main square of Torrox, one of the white villages on Costa del Sol, with a genuine Morisco footprint, there is a bust in his memory. According to another theory, Al Mansur could have been born in Algeciras (Cádiz). In this town there is also a statue in his memory.

These six legacies of the Arab and Islamic past on the Costa del Sol are a good incentive and complement for your stay in this beautiful region of Andalusia, a paradise for relaxation and family tourism. In this blog we will share many more with you.

Tagged in
Visits  Andalusia  Costa del Sol
Let's Go Blog
12 impressive alcázares & alcazabas
Mar 19, 2021
Arab castles and citadels not to be missed in Spain
Read more
7 Spanish dishes you must try
Jan 10, 2021
They are the most famous in Spain and are made with halal ingredients
Read more
'Is this halal?'
Nov 7, 2020
If you wonder how to find halal restaurants, follow these tips!
Read more
View more posts
We use cookies and other technologies
We process personal browsing data, such as IP addresses or online identifiers, and use our own and third-party cookies to analyse the use of the website and personalise our content and advertising based on the analysis of your browsing habits. Access to this website may involve the transmission of such data to social networks or other third parties whose buttons or modules are available on the website, for marketing purposes and others of their own responsibility. You have the right to request access to your data for rectification, deletion or portability, the limitation of its processing or to oppose it, as well as to make a claim to a control authority. For more information about the use of cookies and your rights, access our Cookies