The best mosques for your salat in Spain

Some of them are iconic. Take note.

You are planning your next trip and have been dreaming of visiting Spain for a long time. Its impressive Arab and Muslim monuments, the Alhambra in Granada, the Great Mosque of Córdoba, the legacy of Al Andalus, the charming towns and cities, the colorful landscapes, the glamor of Europe, FCB Barcelona and Real Madrid, the delicious food… You know that Spain is a Muslim-friendly country, where it will be easy to find Halal restaurants. But you have a doubt. You wonder: will it also be easy to find mosques to do salat and feel part of the Ummah during your trip to Spain?


You may be surprised to learn that there are more than 1,300 registered mosques in Spain. In them, the more than two million Muslims who live in Spain pray and carry out community life. They represent approximately 4% of the total population (about 47 million). Of those, 58% are migrants (coming from, above all, Morocco, Pakistan, Senegal and Algeria) and 42% are Spanish. Most of them live in Catalonia, Andalusia, Madrid and the Valencia region. So, logically, it is also in these regions where the largest number of mosques are concentrated.


Take note of the most important and beautiful mosques that you can visit during your trip to Spain. Others are humble, even very humble, but they are the closest you will find to the tourist sites you are probably planning to visit. 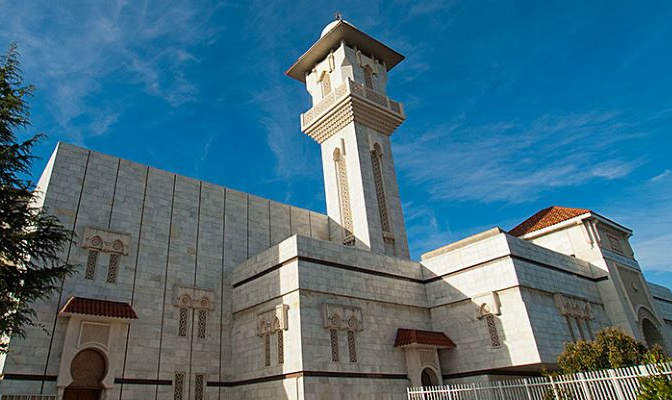 It is the largest masjid in Spain. This mosque, also Islamic Cultural Centre, was opened in 1992. As it is situated next to the busy M-30 road, the most important ring road in Madrid, it popularly is known as Mezquita de la M-30 (the M-30 Mosque). The interior is inspired by the Alhambra in Granada. The complex of 12,000 m2 is distributed in six floors and includes a school, a library, two exhibition halls, a museum, an auditorium, a gym, a restaurant and a cafeteria.

Built entirely in white marble, this mosque is a symbol for Madrid. When it was officially inaugurated by the then King of Spain Juan Carlos I and Prince Salman Ben Abdelaziz of Saudi Arabia it was the largest mosque in Europe. That moment was the culmination of a project signed in 1976 by 18 Muslim countries with diplomatic representation in Spain.  It remains one of the most impressive and important mosques in Europe. 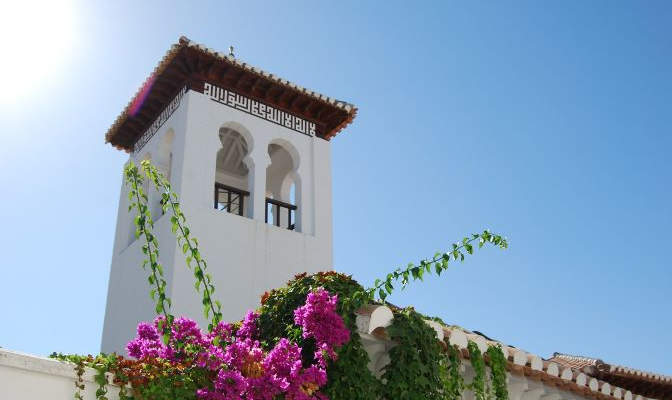 The Mezquita Mayor de Granada, Great Mosque of Granada, is probably the most iconic mosque in Spain. Its opening in 2003 was a milestone in Granada and the fruit of two decades of effort on the part of the 'new' Spanish Muslims. Its location is emblematic: at the top of the Albaicín -the historic Muslim quarter, World Heritage Site- with breathtaking views over the Alhambra.

The mihrab is a replica of the famous one in the Great Mosque of Cordoba. The multi-colored marble tiles are identical to those of the Al Aqsa Mosque in Jerusalem. The great qibla windows are replicas from the Blue Mosque in Istanbul. The alminar or minaret was designed in the original Albaicín style. The mosaic fountain in the patio was built according to a thousand year old Andalusí design and technique by master craftsmen of Fez. There is also a Centre for islamic Studies and a daily programme of recitation and study of the Qur’an and Islamic jurisprudence.

The Great Mosque of Granada is not only a wonderful place for your salats but also to enjoy a rest and feel that the legacy of Al Andalus is alive. 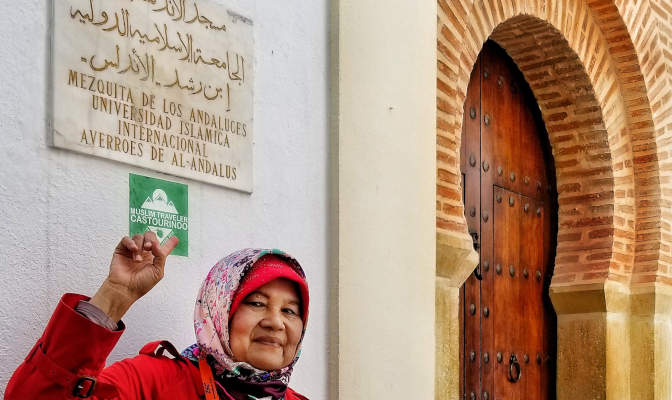 This is the only historic masjid that has survived to this day and is currently in operation. It is exciting to hear the adhan today, a few meters from the Great Mosque of Cordoba. This small but lovely oratory of Andalusí origin, housed in a 12th century building, was restored in the 20th century. The mosque is located next to what was the Averroes Islamic University, which was in operation between 1994 and 2001. Since 2008 the masjid has been in operation intermittently, until the last reopening in 2011. Los Andaluces Mosque consists of a small entrance courtyard and a prayer room with a single nave. The minaret stands on the arch of the Calleja de la Hoguera, where it is located. 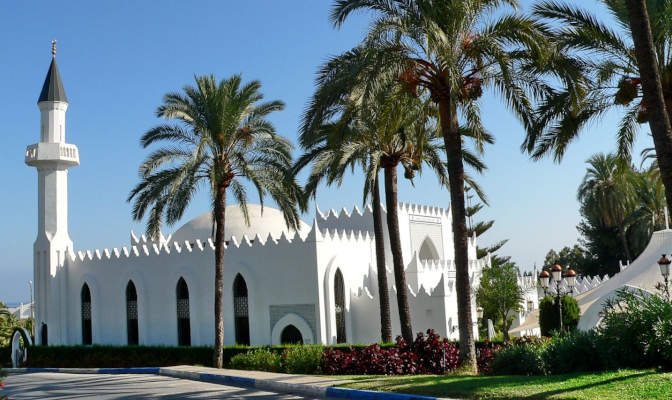 It’s ocated in the Marbella’s golden mile, one of the most famous and iconic portions of the Costa del Sol, in the province of Malaga, Andalusia. This quiet and beautiful mosque opened in 1981 with funds contributed by the Saudi royal family.  The masjid’s style mixes Arab and Andalusian elements. The 12 meters diameter dome has 24 windows with multicolored crystals that give a awesome lighting. The mosque is surrounded by nice gardens inviting one to spiritual recollection. We also find here a center for Islamic studies with an important library. 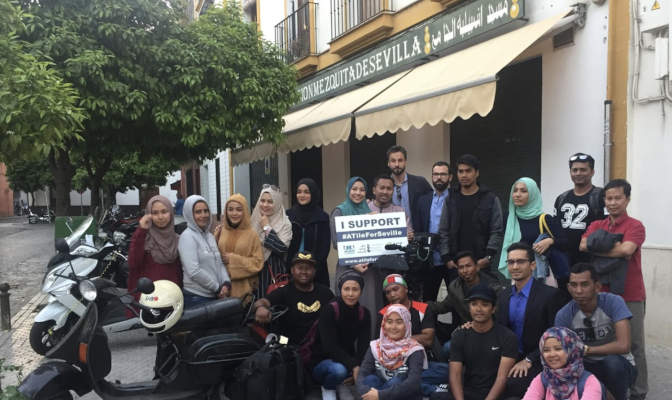 Over the years, the Muslims of Seville -about 30,000 today- have had different centers in the city and currently one in the heart of Seville, which has been open and full of activity for more than 15 years. In 2005, the Seville Mosque Foundation was established with the aim of representing the community and promoting the construction of a mosque and Islamic Cultural Center in keeping with the important role that Islam has played in the history of Seville. In 2015 they launched an international campaign to achieve this. 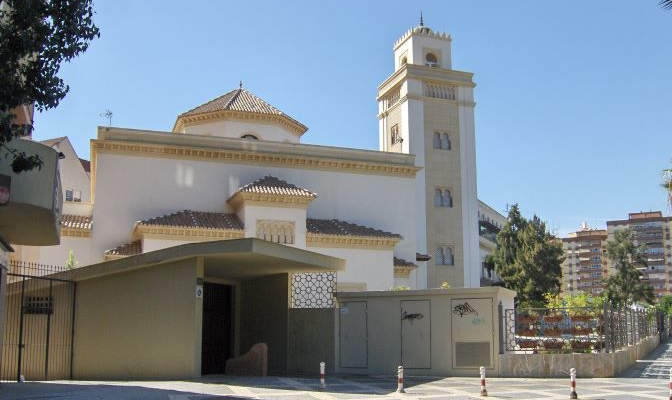 Its 25-meter minaret stands out in one of the neighborhoods of Malaga, about 25 minutes walking from the city center. The Mosque of Al Andalus, also known as the Mosque of Malaga, was promoted by the Suhail Foundation, linked to the Saudi royal family. It has three prayer rooms, with capacity for 500 people. The mihrab in the prayer room that is used on Fridays and on Islamic festivities is a replica of that of the Great Mosque of Cordoba. In fact, the entire building is inspired by the architecture of Al Andalus. The center also includes a school with six classrooms, a conference room and an important library dedicated to the study of Al Andalus, with books in Arabic, Spanish and English. 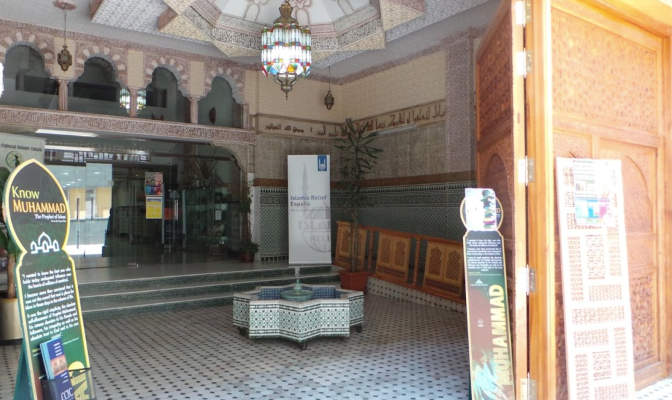 This Islamic Cultural Center and mosque is located in the Clot district. It is an open entity that tries to make Islam known to all people without distinction. They organize numerous social and cultural activities that are intended to promote coexistence among all, whether Muslim or not, and a greater knowledge of Islam. 'A space where each and everyone can offer their virtues to Catalan society', they explain.

It is a large and beautiful mosque. The arches and tiles at the entrance stand out, as well as an Andalusian-inspired water fountain. 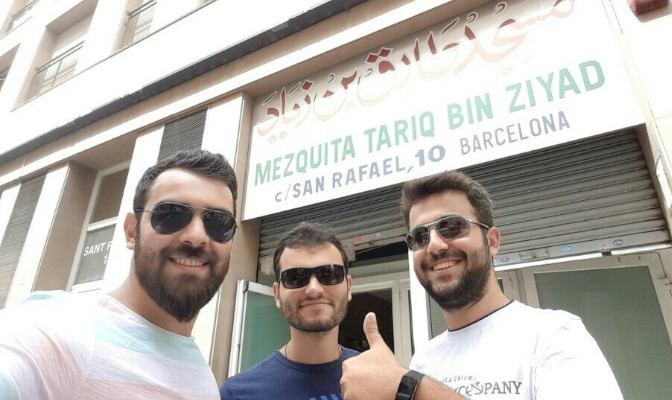 It is the most central masjid in Barcelona. Tariq Bin Ziyad Mosque is in the Raval area, one of the neighborhoods with the highest concentration of Muslim immigrants in Barcelona. It is very close to Ramblas, the most famous street in the city, a real magnet for tourists. However, this mosque is small, very crowded, with very humble facilities and no area for women. 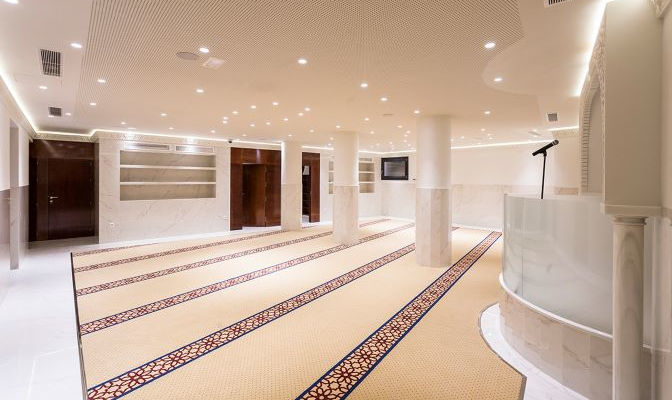 In the heart of Granada, very close to Calderería Nueva street, in the lower part of the Albaicín (the historic Muslim quarter, World Heritage Site), you will find this small mosque, which was the first one that opened in Granada after the expulsion of the Muslims in the 15th century. Recently renovated (2018), it also houses the Foundation for Islamic Culture and Religious Tolerance. You will find it very close to the souk and the tea shop area. 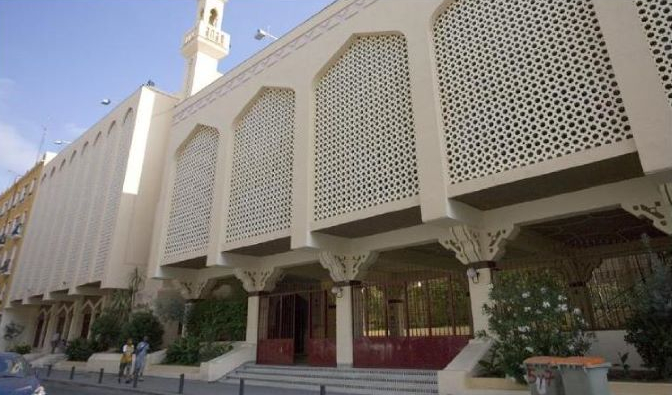 It is located in one of the most popular districts in Madrid, Estrecho, which is why it is also known as Mezquita de Estrecho. It was the first mosque to be opened in Madrid (1988), since the city passed into Christian hands in 1085. The complex, distributed over four floors with a minaret and a dome, has, in addition to the mosque and offices, a nursery, a school, a library, an auditorium, a meeting room and a halal food store. This mosque is also the headquarters of the Union of Islamic Communities of Spain. 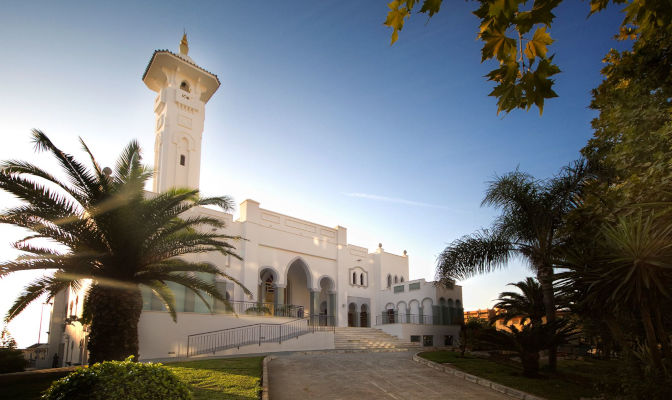 This mosque is located in the town of Fuengirola, in the province of Malaga. It’s also known as Islamic Cultural Center Sohail, the second mosque built on the Costa del Sol. It was erected in 1992 after the masjid of Marbella and before that, Malaga, and today it's one of the largest and most active in the region. The center, located in the heart of the town, offers several services aimed at both Muslims and non-Muslims. It is quiet and nice. 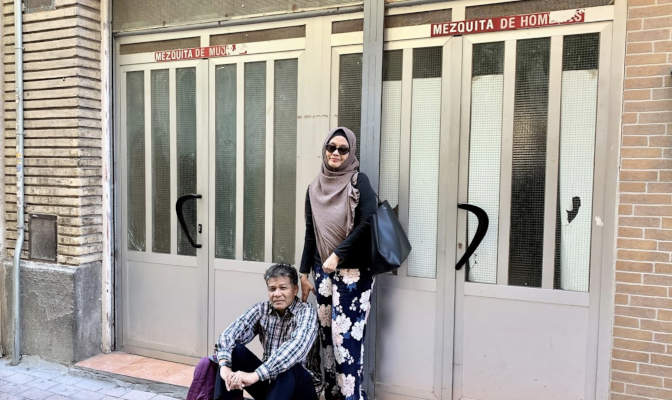 In Zaragoza there are several humble mosques. The closest to the monumental area (Basilica del Pilar, La Seo, Plaza de las Catedrales...) is the Al-Furqan Mosque. Only open during prayer times.


Take note that there are monumental historic mosques no suitable for prayer in Spain. Landmarks like the Great Mosque of Cordoba or the Bab Mardum Mosque of Toledo (also called the Mosque of Cristo de la Luz) are just monuments. For this reason, salat is not allowed in them.

Tagged in
Travel tips  Visits  Andalusia  Aragon  Costa del Sol  Barcelona  Cordoba  Fuengirola  Granada  Madrid  Malaga  Marbella  Seville
Let's Go Blog
12 impressive alcázares & alcazabas
Mar 19, 2021
Arab castles and citadels not to be missed in Spain
Read more
7 Spanish dishes you must try
Jan 10, 2021
They are the most famous in Spain and are made with halal ingredients
Read more
'Is this halal?'
Nov 7, 2020
If you wonder how to find halal restaurants, follow these tips!
Read more
View more posts
We use cookies and other technologies
We process personal browsing data, such as IP addresses or online identifiers, and use our own and third-party cookies to analyse the use of the website and personalise our content and advertising based on the analysis of your browsing habits. Access to this website may involve the transmission of such data to social networks or other third parties whose buttons or modules are available on the website, for marketing purposes and others of their own responsibility. You have the right to request access to your data for rectification, deletion or portability, the limitation of its processing or to oppose it, as well as to make a claim to a control authority. For more information about the use of cookies and your rights, access our Cookies