Wonders of the Alhambra

Eight amazing reasons that definitely will captive you.

The Alhambra is the second most visited monument in Spain and one of the ten most visited in the world. The beauty of this palatial-city attracts nearly 3 million visitors to Granada every year ... And there would be many more if visits to the monument were not restricted by Unesco regulations to guarantee the good condition and conservation of this iconic monument, declared world heritage in 1984.

The red fortress -that is what 'Qalat Al hambra' means in Arabic, the words from which the current name derives- captivates people from all over the world for its splendid beauty. But the Alhambra is much more than a monument of breathtaking beauty, it is an architectural wonder and a place full of meaning and spiritual depth. And it is for this reason that Muslims can especially enjoy it, understand it and value it in its true dimension.

Here are eight prodigious and surprising reasons why the Alhambra will definitely captivate you.

1. The only palace-poem in the world 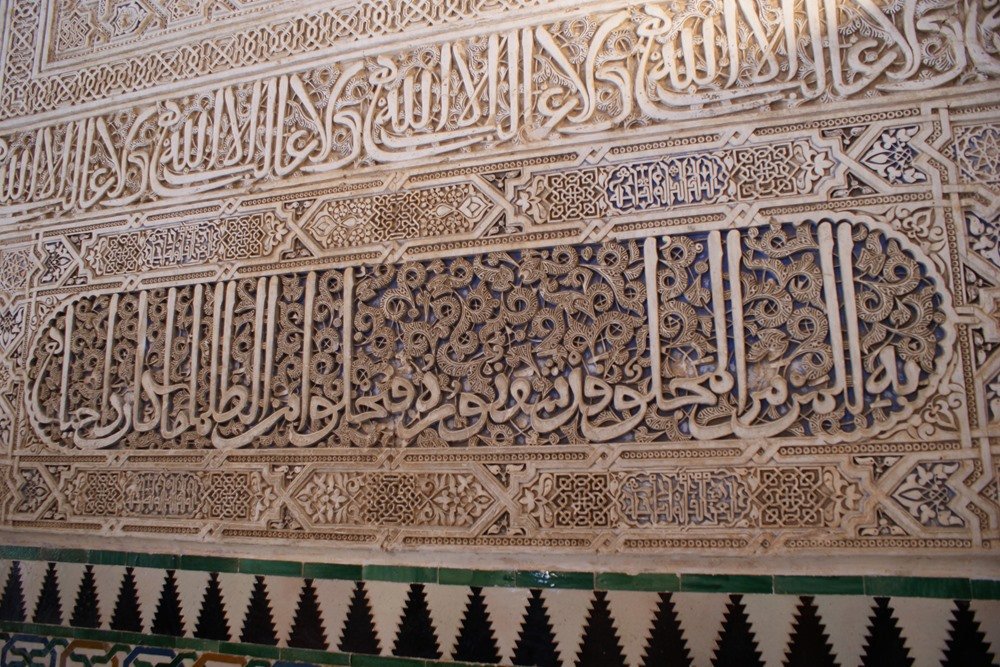 Some of the Arabic inscriptions in the Alhambra.

It is impressive to contemplate the deep fusion between poetry and architecture with which the Alhambra palaces were conceived and built. Written in Arabic on its walls you will find poetic structures that describe, symbolize and fill the buildings with meaning. Among the more than 10,000 inscriptions that cover it as if it were an open book there are Surahs, allusions to Paradise, beauty, happiness… Also to historical events and outstanding actions of the Nasrid dynasty, which was the one that ordered its construction. But there is an inscription that is the one that is repeated the most and stands out above the others: Wa la ghalib illa Allah. There is no winner but Allah. Words that take on special meaning if we take into account that the kingdom of Granada, the last territory of Al Andalus, was at war with the Christian kingdoms and probably sensed that the end was near. 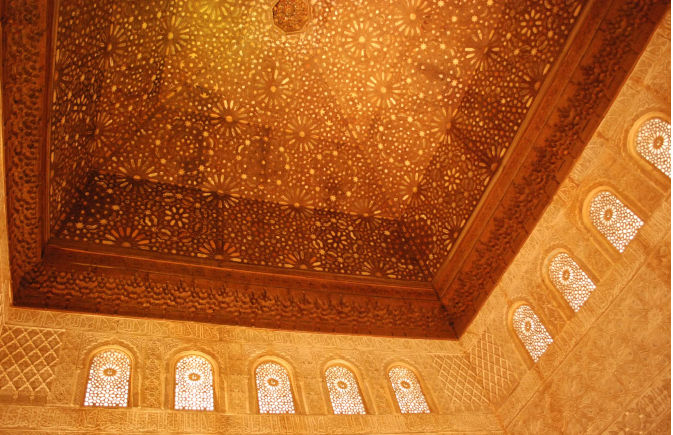 The wonderful starry ceiling of the Throne Room in the Alhambra, Granada.

The Throne Room, also called the Hall of Ambassadors, is the most majestic hall of the palace, the place where the throne was and where official receptions took place. The ceiling of this room is a true jewel with Quranic meanings.

The magnificent cubic ceiling is made up of 8,017 pieces of cedar wood in the shape of eight-pointed  and 16-pointed stars. These stars form seven levels or concentric circles that represent the seven heavens of Paradise described in the holy Quran. At the last level, the eighth heaven, is the Throne of Allah, represented by a central cube of muqarnas with the four trees of life and the four rivers of Paradise located at the corners. The cedar stars are painted in such a way that they seem nacre, silver and ivory.  Under this magnificent dome, Surah Al Mulk (The Kingdom) is almost completely reproduced on the walls. 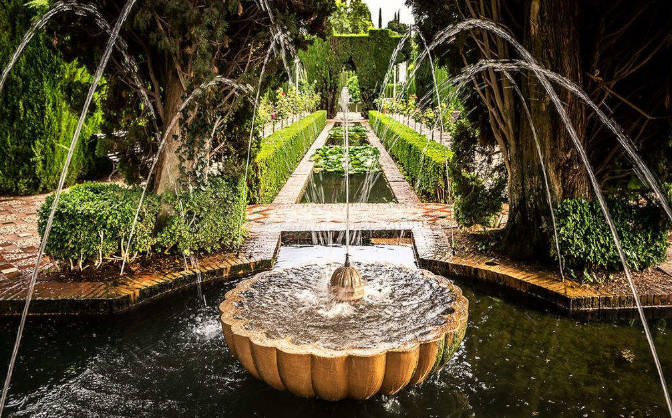 The Alhambra is the result of advanced engineering techniques that turned a dry and stony enclave into a true oasis with refined palaces, refreshing patios, idyllic gardens and ever-flowing fountains. In the 12th century, the Nasrid engineers channeled the water from the Darro River, 6 kilometers away, so that it reached the Generalife and the Alhambra area through the so-called Acequia Real (you can translate it as Royal Canal) and then distributed it through a complex hydraulic system. In this sophisticated system, the ponds have a strategic role. 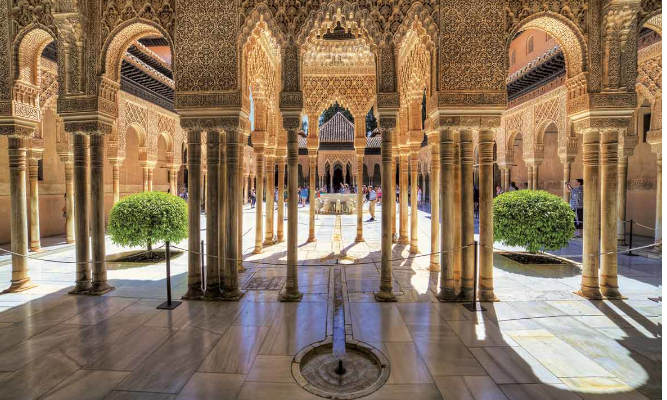 Columns of Arrayanes courtyard, with an effective anti-earthquake system.

For centuries, the Alhambra has survived earthquakes in the area thanks to the fact that the walls are made of rammed earth and the columns have a sheet of lead between the base and the column, and between the column and the lintel, which makes the building ‘dance’ if there are tremors.  A simple but clever and very effective system. You will find columns in the patios where the gray lead sheet is perfectly visible. This anti-earthquake system is an architectural marvel. 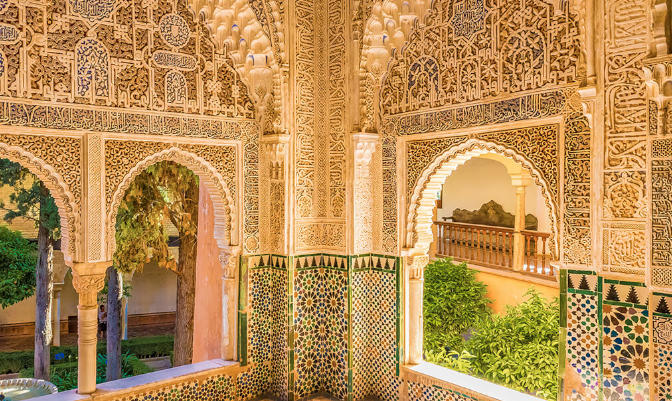 The courtyards help regulate the temperature in the rooms of the Alhambra.

A planned study of North-South orientation and the combination of light and shadow made possible that the residential areas were adapted to the different seasons throughout the year, graduating the temperature. This is especially noticeable in the Palacio de Comares. On other occasions, thanks to the geometric structure of the rooms, the absence of low windows and the placement of upper windows, they achieved intelligent cooling systems. Recent bioclimatic investigations discovered that there is a characteristic microclimate for each of the areas and rooms of the Alhambra. The construction is highly energy efficient. 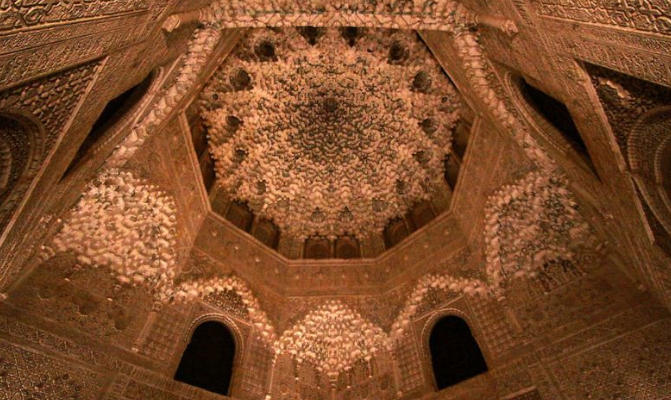 The breathtaking dome in Dos Hermanas Room, in the Alhambra.

Cosmic meanings like the one about the muqarnas dome in Dos Hermanas Room. The meaning of this breathtaking ‘starry’ dome is explained in the poem by Ibn-Zamrak that can be read on the walls of the room itself: the celestial bodies represented in the dome move in their orbits changing their appearance day and night. Clearly it represents the idea of a rotating dome that reflects the daily cycle of light and dark and the constellations' changing positions. 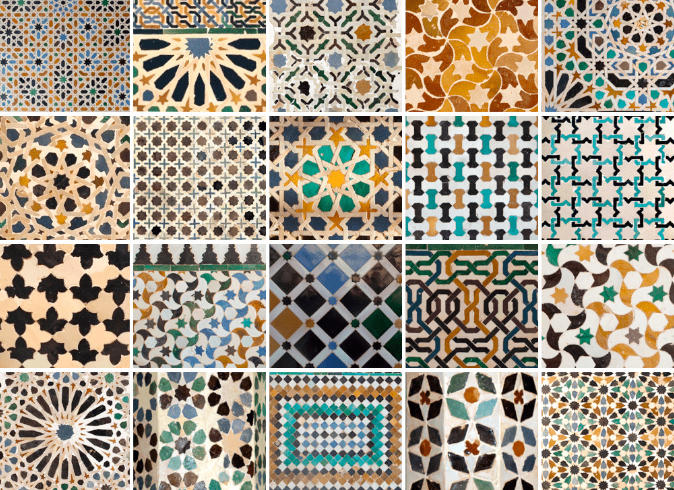 All the mosaic patterns present in the Alhambra.

Geometry is a key concept of Islamic art that not only acts as a stylistic element but a guiding principle of all architectural and ornamental conception. Geometric designs are repeated in La Alhambra  with different formats, materials and surfaces, but perhaps the most representative are the mosaics and tiles.

In geometry there are only 17 plane crystallographic groups, that is, 17 ways of describing a plane. These groups were demonstrated by the Russian mathematician Fedorov in 1891. However, all of them had already been represented previously in the Alhambra, more than five hundred years before. In fact, it is the only ancient monument in the world in which all the 17 patterns are present. Isn't it amazing?

The mastery of the architects of the Alhmabra is clear and evident. They used symmetry and geometry as a way to express the beauty and harmony of Allah's creation. But since perfection is only from Allah, they also included deliberately caused errors in imperceptible places. 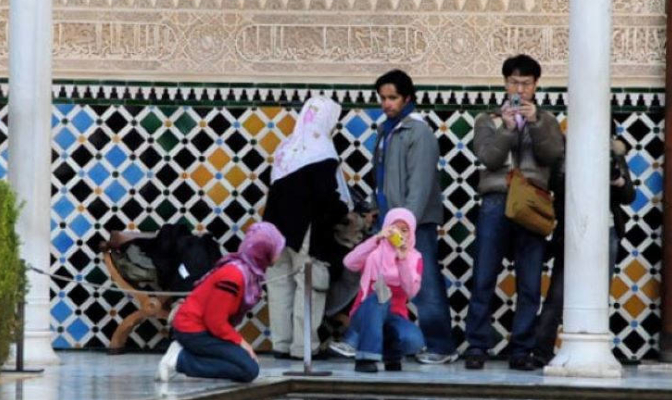 Muslim tourists in the Alhambra.

In addition to a spiritual perspective, the palatine city was built with a much more earthly perspective and taking into account the full comfort of its inhabitants. The palaces boasts surprising and delicate details. For example, the sultans and their families contemplated their gardens and rooms from a seated position. From that perspective, the vision of Patio de los Arrayanes (Arrayanes Courtyard), also called Patio de los Leones (Lions Courtyard), is different. Try to see them yourself from this perspective when you visit the Alhambra. Also, if you look closely, you will discover that the columns are not imposing in height, as is often the case with many other monuments. On the contrary, the Alhambra’s columns adapt to your height. Architecture takes a human size.

Did you already know these eight wonders of the Alhambra? We are sure that you will not want to miss a visit to this essential monument in Granada. And if you have already been able to visit it once, we can make sure that each visit brings new surprises.

Tagged in
Visits  Andalusia  Granada
Let's Go Blog
12 impressive alcázares & alcazabas
Mar 19, 2021
Arab castles and citadels not to be missed in Spain
Read more
7 Spanish dishes you must try
Jan 10, 2021
They are the most famous in Spain and are made with halal ingredients
Read more
'Is this halal?'
Nov 7, 2020
If you wonder how to find halal restaurants, follow these tips!
Read more
View more posts
We use cookies and other technologies
We process personal browsing data, such as IP addresses or online identifiers, and use our own and third-party cookies to analyse the use of the website and personalise our content and advertising based on the analysis of your browsing habits. Access to this website may involve the transmission of such data to social networks or other third parties whose buttons or modules are available on the website, for marketing purposes and others of their own responsibility. You have the right to request access to your data for rectification, deletion or portability, the limitation of its processing or to oppose it, as well as to make a claim to a control authority. For more information about the use of cookies and your rights, access our Cookies